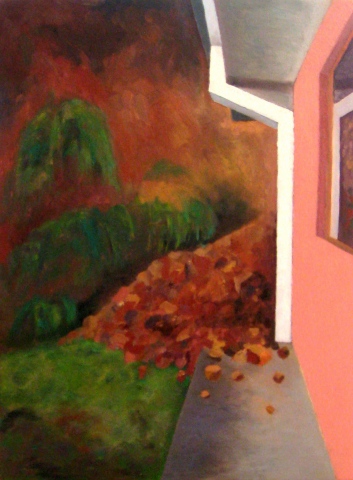 August 2, 2007 Not long ago we encountered the worst tropical storm to date, with lighting and thunder crashing seemingly directly overhead. The storm was quite frightening, and caused severe damage in parts of the country, but was also exhilarating. The Spanish word for storm is tormenta, which definitely seemed like an appropriate term that evening.

Water is extremely important to Costa Rica, from the daily tropical storms in the rainy season to the rivers that were the country’s original highways. Water brings life to this country, and can also bring destruction. But mostly life, as this is a country very much alive with innumerable plant and animal species, a vibrant culture and 4 million people.

The next morning the skies were a clear, cloudless blue and everything was once again calm. Butterflies were floating outside and birds were chirping. When stepping outside for the first time that morning, I noticed the hillside had collapsed behind my casita from the weight of the rain, and there it was: the next painting, and the last painting to be completed in Costa Rica. The title of this painting is Después de la Tormenta, Spanish for After the Storm.

"After the clatter of tropical rain, A blossoming of butterflies, The hillside ruptured but joyful In its muddy collapse." -Gwen Bindas