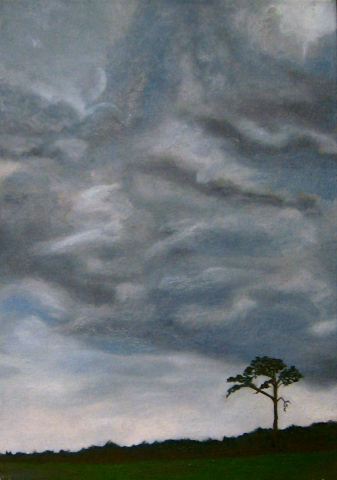 July 26, 2007 Carlos lives here at the colony with his wife Nancy, and is the brother of Francisco, the proprietor since the colony founder died a few years ago. He is one of our go-to persons – if we need a ride to the market, or need anything for our casitas, we look for Carlos. He is a great person and loved by everyone at the colony.

Trips with Carlos are never dull. Carlos took us horseback riding through the Costa Rican countryside, which was an incredible trip, riding and galloping through the jungle, the country and crossing small rivers near waterfalls. He also organized a trip to the Butterfly Farm, a lovely place that houses amazing species of butterflies native to Costa Rica.

On the way back from the Butterfly Farm, we flew down roads that would not be considered passable in the United States, but we were in a 4 wheel drive vehicle, and the countryside was very beautiful, and it was a lot of fun. He took a side road, and then this amazing tree appeared in view – very tall, rising above the rest of the forest. This image was the inspiration for this painting. The skies were pregnant with water, about to break, and clouds were swirling overhead.

He stopped by a group of plants about the heights of corn, with seeds roughly the size of peas. We picked the seeds of the plant, which are very striking and range in color from pearl to mottled black and white, with endless variances. They form a natural bead with a hole all the way though the center. The seeds are called “The Tears of Saint Peter,” which sounds very lovely in Spanish, and they are made into jewelry and sold at high prices in markets across the country. The whole experience really was an adventure.

When Carlos invited me to join him for a night on the town, how could I resist? And another adventure followed. We started at the local pool hall, which was rowdy, dirty, relaxed and fun. I soon found myself playing a very interesting game, consisting of five kernels of corn with one side painted red, which were rolled on to the surface of a pool table like dice. It was a gambling game, but the stakes were low – 50 colones to buy in, about US 10 cents. It was very fun and the locals included me with warm laughter.

After the pool hall we found ourselves in a neighboring town with several of Carlos’s friends, where an annual city celebration was taking place. The atmosphere was very festive, with live music, food booths, an outdoor bar and fireworks. At one point the amigos were chanting “Eh! Eh! Eh! Eh!” forming a circle around one of they guys who was expected to dance. The guys motioned for me to join in, even though my Gringo dancing skills are lacking, and it was great fun.

Upon arrival from the States, one finds behavior that is slightly alarming. People talk and laugh a little too loud, and drive a little too fast on roads that a little too rough, and play loud music a little too early in the morning. The fireworks at the festival were a little too close to the trees, but after awhile, one realizes that there is no reason to worry. Quite the opposite in fact, as people are simply more relaxed. The smallest daily tasks become a joyous celebration. Perhaps Ticos have a little bit more fun.

Pura vida. You will hear these words spoken all over Costa Rica. The literal translation means pure life, which seems appropriate for this tiny county that houses an astonishing 3% of the world’s biodiversity, but it means something else to Ticos. It means something like everything is okay. A place can be pura vida, or a person, or a moment. It is an affirmation of life, happiness and tranquility.

"The Tears of Saint Peter fall from marbled skies, Heavy with what’s possible.

Here where we laugh too loudly and drive too fast, A lone tree combs the clouds for dreams." -Gwen Bindas