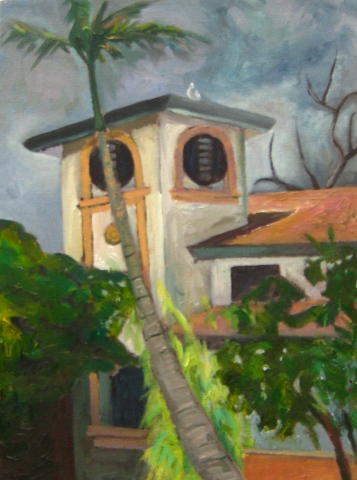 July 6, 2007 Two days ago I walked into town and began this painting in Ciudad Colón’s town square. Quite a crowd gathered around. People were very interested and friendly, and spoke to me at length in Spanish, even after they realized I knew very little Spanish. The men insisted on shaking my hand, even though my own hands were covered in paint.

One young man in particular hung around almost the entire time I painted. A white bird landed on the roof of the building I was painting, and the man pointed to the bird and said, “¡Un pájaro!” Pájaro is one of the Spanish words for bird, and the man obviously wanted me to paint the bird into the picture. I did, even though it was against my nature, thinking I might paint over it later.

That is how the bird on the roof became the most important element to this work.

"I touch down here, where the worlds meet, Between the quilted skies and the shining grasses, Where the trunk of a palm tree leans long and lazy Across the center of the village" -Gwen Bindas