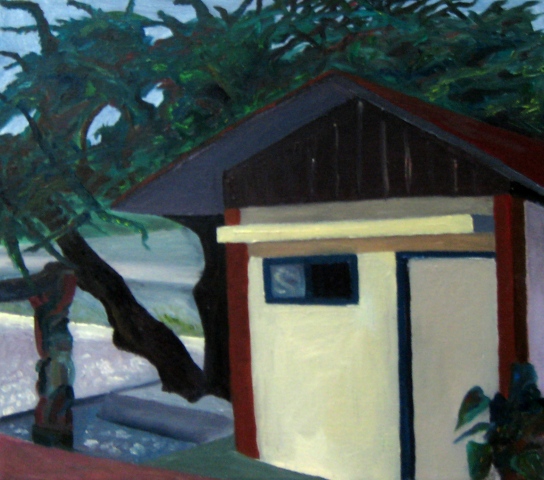 July 15, 2007 This tree is in the central square in Ciudad Colón. It is the town symbol and loved by the citizens. There is a totem pole-like structure supporting the tree on the left, and in life this structure depicts children and adults embracing.

By some accounts the tree is 125 years old, but when I was in town painting today, a man watching me paint told me the tree is really 400 years old. He spoke to me in Spanish but spoke slowly, and I was able to understand what he was saying. He told me the tree was there before any of the surrounding buildings. He also told me his father is ninety-six years old, and when his father was “un niño” (a boy) he would play in the tree. I asked him if the tree were much smaller then, and he said no, it was just as large, and that since then they built the totem-like structure to support it, so its major limb would not break.

It was a nice story. I tried to verify the age of the tree, as there is a placard in front of it, but it does not state the age.

I enjoyed painting in town today. Many people stopped to speak with me or to watch me paint and told me the tree was “muy importante” (very important). Children are always especially interested, and it was fun to be surrounded by people at times.

The structure in the foreground contains a number of trophies, although for what I am not sure, but I assume they are for futbol (known to Americans as soccer) which is a favorite national pastime.

"Tree rings like ribbons, Tying back the hair of every child Who has ever grown taller In this small town: