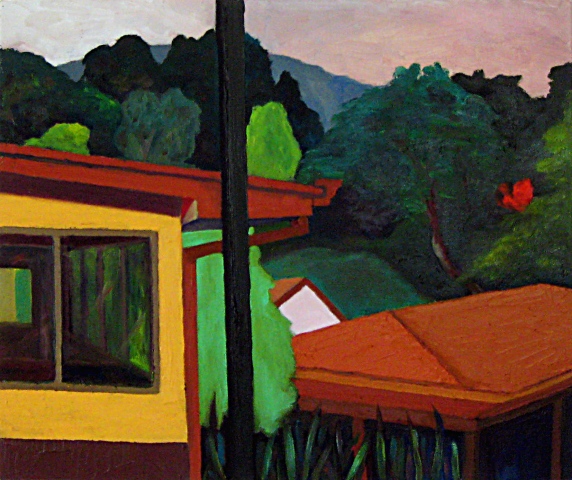 Loaned to the US Embassy, Dar es Salaam, Tanzania

July 18, 2007 While at the pool a few weeks ago I met a very old man who was sitting in a chair near the pool’s edge. I introduced myself, as did he, and I found his name was Bill. He told me he had seen someone painting on the colony grounds earlier, and asked if it had been me. I replied that yes, it was me he had seen painting. “What the hell were you painting?” he asked candidly. I almost laughed out loud. The elderly are like children in the respect that you never know what they are going to say.

I told him that I had been painting a view of the colony grounds, a view that I was later to find included his house.

I asked him what brought him here to the colony. “I’m dying,” he replied, and so began an interesting exchange with this very curious old man. I spoke to him at length that day and that conversation began an unlikely friendship.

I learned that he is ninety-five years old. In his day he was a political activist and at one time wanted dead by the leaders of many Latin American nations. He has lived at the colony in Costa Rica for nine years, he has written several books of poetry in his old age, and he occasionally paints. He walks around the pool every day for exercise.

He lent me a book of poetry he wrote, and when I didn’t return it on time he became agitated, but when I finally did bring it back, he had another book ready for me.

After much thought about Bill’s sentiments, I have come to the conclusion that we are all dying. From the moment of birth we are on a journey that culminates in death. But we are not dead yet, which means we are alive -- and life is something worth celebrating.

Update: A few days after I returned home from the colony, an artist who was still there wrote me to let me know Bill had died. I am glad I got a chance to know him.

"How the spirit takes up residence in the body, How in coming to this brightly colored house to live, We die a little each day, Our lives, poetry we only borrow." -Gwen Bindas